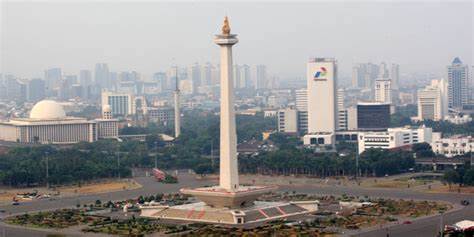 President Joko Widodo announced on August 26 that the government will build a new capital city in East Kalimantan to ease pressure on congested and sinking Jakarta, following in the footsteps of several other countries which have moved their centers of government power.
​
The president said the new administrative center will be located between North Penajam Paser and Kutai Kartanegara regencies in East Kalimantan. Jakarta will remain the focus of business, trade and services. The relocation of the capital, some 1,400 km away from Jakarta, is expected to help spread economic activity outside of the nation’s most-populous island of Java.
​
Widodo appears determined to make the relocation of the capital one of the major programs of his second and final term in office and a major part of his legacy as Indonesia’s seventh president. What should be the ideal site for the center of the government has been a matter of inquiry since the early days of independence.
​
While Widodo and his advisors have settled on East Kalimantan, the costs and the logistics associated with such a plan will be huge and extremely time-consuming, likely spanning several different government administrations.
​
A major question mark is where the money to build a new administrative capital will come from, estimated at around Rp466 trillion. In addition, the risk of corruption will be immense, as most of the construction plans and projects will need to go through the notoriously corrupt House of Representatives (DPR).
​
The president and lawmakers will also need to factor in the political costs of such a massive program and early indications suggest that garnering enough public support for the move will not be easy, especially among civil servants accustomed to the trappings of working and living in Jakarta.
​
According to the results of public opinion surveys conducted shortly before Widodo’s announcement, the public is largely split on supporting the government’s plan, while civil servants currently stationed in the capital are overwhelmingly against the possibility of uprooting to rural East Kalimantan.
​
A poll by the Indonesian Public Opinion Study Group (KedaiKopi) found that 39.8% of respondents objected to the relocation plan, compared to 35.6% who supported it. The remaining 24.6% chose not to answer. The survey was conducted between August 14 and 21, involving 1,200 respondents in 34 provinces.
​
The highest number of respondents who rejected moving the capital was in Jakarta with 95%, while the highest number of respondents who supported the plan was in Sulawesi with 68%, suggesting that public support for the capital relocation plan will be heavily influenced by residents’ proximity to the planned new location in East Kalimantan.
​
According to a survey conducted from August 7 to 20 by survey group Indonesia Development Monitoring (IDM), 94% of civil servants in Jakarta disagreed with relocating the capital. Around 93% of the civil servants expressed concerns about medical and education facilities in the new capital. Around 78.3% of the respondents said they would file for early retirement before moving to East Kalimantan, while 19.8% said they will move to the new location.
​
If the plan can be realized, however, Widodo will likely be credited with foresight and accepting the reality that it is only a matter of time before Jakarta can no longer serve as the center of government power. The rapidly growing metropolis is becoming increasingly prone to floods, diseases, earthquakes and insurmountable spatial planning challenges as it is slowly sinking and roads are becoming more congested every day.
​
With Indonesia’s capital relocation proposal still in its early stages, planners and policymakers have plenty of time to study similar endeavors undertaken by a handful of other countries.
​
NIGERIA: Africa’s most populous country moved its capital in 1991 from teeming Lagos to Abuja, a planned city built in the 1980s that was more central and less congested.
​
AUSTRALIA: Australia’s purpose-built capital Canberra became official in the late 1920s as a compromise between rivals Sydney and Melbourne, which both dwarf its modest population of about 400,000.
​
PAKISTAN: Pakistan moved its seat of government from Karachi on the far southern coast to the purpose-built city of Islamabad in the 1960s. The new capital, developed by a Greek architect, is known for its greenery and quality living standards.
​
MYANMAR: Myanmar shifted its capital from Yangon to central Naypyidaw in the mid-2000s. The sprawling city has almost six times the land area of New York. It boasts a replica of Yangon’s Shwedagon Pagoda and a 20-lane highway, although they’re often empty as the city is sparsely populated.
​
BRAZIL: The South American nation started moving its capital to Brasilia from Rio de Janeiro in 1960. Located in the country’s vast Amazon interior, it was acclaimed for large-scale modernist architecture and designated a UNESCO World Heritage Site in 1987.
​
KAZAKHSTAN: The country’s capital Astana – recently renamed Nursultan after its ex-president -became the country’s administrative center in 1997, taking the crown from Almaty. Designed by a Japanese architect, the city is known for its futuristic skyline.
​
EGYPT: Egypt is planning to move to a new administrative capital being built in the desert some 45 km from overcrowded Cairo, a city of nearly 20 million people.